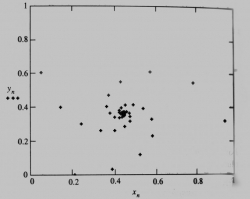 Many years ago I picked up the superb book “Mathematics: The Science of Patterns” by Keith Devlin and came across a most fascinating result that I had never seen before.  If we take the unit imaginary I to the power of itself, i.e. we form I^I we end up with a real number.  Now this looked like real mystical stuff to me so it completely grabbed my attention for quite a few months.  I satisfied myself that you do indeed get a real number, something like 0.207879576350762….. when you form I to the power I and then wondered what would happen if you took the result to the power of I and then the result of that to the power of I and so on.  This I later found was called creating “Towers of Power”.  The graph in the accompanying figure (see the single point on the real line at a little over 0.2) shows the result of taking I to higher and higher powers of I.  The only real number formed is that created by I^I as I first saw in Devlin’s book.  The rest of the all the other I to the power I iterations are imaginary numbers.  Now before I plotted out this graph I really thought I’d stumbled upon something really significant here, in fact I wondered if when plotted whether I would see the face of God 🙂  I was a bit disheartened to see the curve I did get, and when I told my mathematical fantasy to a University colleague he said to me “How do you actually know that this isn’t the face of God?” – a rather irreligious fellow, and I think I’d better leave things there.  Anyhow, what is extremely interesting as you can see is that the iterations do not “explode”, on the contrary they converge to a finite limit!!  The limit to the infinite unit imaginary Tower of Power is 0.438 282 936 727 032… + i 0.360 592 471 871 385…

This in itself was equally fascinating to me and by looking into all this complex number mathematics a bit more deeply I came up with two papers which were subsequently published in the Mathematical Gazette.  In the second of these articles I show how to pull out some very interesting fractals hiding in the mathematics of imaginary Towers of Power 🙂

2)  The Mathematical Gazette, volume 82, number 493, March 1998, page 19, A Beautiful New Playground”, Greg Parker & Steve Roberts.  This issue also had one of the fractals I discovered as the cover picture 🙂

If this stuff interests you at all then I strongly suggest you play in this mathematical playground yourself for a little while, I am quite sure there are plenty more fascinating results to be discovered hiding within complex power iterations.