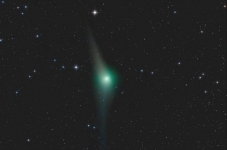 Each month I shall publish a high-impact image from the Scientific Artist.  For this month I have chosen beautiful comet Garradd which was acquired at the New Forest observatory earlier this year.  This image was captured using an 11″ Celestron Nexstar GPS Schmidt-Cassegrain reflecting telescope with a Starlight Xpress M25C one-shot colour CCD (6-Megapixels).  The sub-exposures stacked to create this image were also individually processed to make an animation.  In this image North is to the right.  The comet has two tails, the pale (upward pointing) tail is the particle tail and the blue (downward pointing) tail is the “ion tail” which points away from the direction of the Sun.

A Canon 5D MkII image taken over the New Forest at sunset on the 5th March 2012.  Spikes used to show the 3 planets on display this evening – at the top we have Jupiter, just below Jupiter is Venus, and follow the line down to just above the horizon and we see tiny little Mercury closely following the Sun below the horizon.

Remember – if you want to see Mercury DO NOT go scanning the horizon with any optical aid (binoculars, telescopes, spotting scopes, etc.) UNTIL the Sun has completely set, or alternatively well before the Sun has risen. 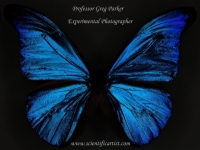 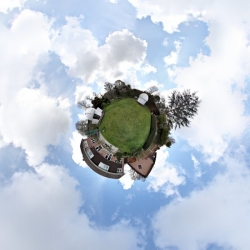 I was sitting at the computer yesterday typing in some old rubbish when it suddenly came to me how to take those “Little Planet” type pictures.  So I ran outside with the Canon 5D MkII and a fish eye lens (between the rain showers) and took a panorama of the New Forest Observatories – and this was the result 🙂  It worked 🙂 🙂 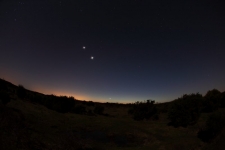 Taken last night (05/03/2012) over the New Forest with the Canon 5D MkII and a fish-eye lens.  In this image we have Jupiter as the highest bright object, next down is Venus, and the reddish (small) object close to the horizon is little Mercury, my favourite planet.  Blazing Moon overhead so no good for deep-sky work, but pretty excellent for capturing planets.  Got home to realise I should have taken a ton of shots to make an animation of Mercury setting – oh well, maybe next time.

Got today’s EPOD with the pinhole camera image shown below on December 21st.  Thank you Jim for continuing to show my work 🙂

Here is another Solstice-to-Solstice image of the Sun’s path across the sky taken with a tea-caddy tin pinhole camera and FLAT film.  The beer can pinhole camera uses film folded around the inside of the can and leads to a more distorted final image.  Camera opened on 18th June 2011 (3 days before Summer Solstice) and closed on 21st December 2011 (one day before Winter Solstice).

The straight line towards the left of the image is the edge of the roof of the house across the road.  You can see plenty of trees along my southern horizon.  The two light dome-shaped regions are the two New Forest observatories in my garden. 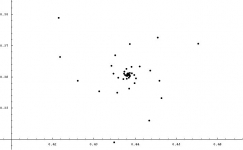 As you can see, there is nothing at all obvious coming out from the sequence so far.  However, when I looked at terms well into the sequence it became clear that this iteration was coming to a limit – how exciting!!  I had never played with this sort of maths before and this was (as far as I was concerned) all brand new and unknown territory.  Certainly a couple of guys in the Maths Department I spoke too had never heard of it – so it must be new 🙂  As I am rather prone to fantasy I wondered if I had stumbled  upon something really deep here, and if I plotted out all these data points, what would I get?  I thought it might reveal the Face of God!  So I used the same mathematics package to plot all the points out and what I got is what you see here, a three-barred spiral with the points all iterating towards a limit somewhere around 0.438 + 0.36i and unfortunately no God-like face (although one irreverent Lecturer did ask me how I knew that wasn’t indeed the Face of God!).  Moving swiftly on – this small excursion into a subject that is not my speciality led to a paper called “Complex Power Iterations” by Greg Parker and Steve Abbott (The Mathematical Gazette, Volume 81, Number 492, November 1997, pp.431-434), my first ever mathematical paper.

I put this stuff aside for a while but it kept niggling at me and I worked on it again a few months later.  This time I managed (with my PhD student at the time Steve Roberts) to actually extricate a fractal from these mathematical meanderings.  This work formed the paper “A Beautiful New Playground” by Greg Parker and Steve Roberts (The Mathematical Gazette, Volume 82, Number 493, March 1998, pp.19-25) where a couple of very interesting fractals were found.

I subsequently found out that these “Towers of Power” were quite well known long before I re-discovered them, in fact someone had written a paper on the subject as “people seem to keep re-discovering these objects on a fairly regular basis” 🙂  However, I did fortunately bring a few new bits of data to a wider audience, including the values of the interation limits and the full form of the more complex fractal beyond the central cardioid (you need to read the second Mathemtical Gazette paper to see what I’m on about).

All in all it was a very exciting experience to suddenly uncover (what I thought) was an entirely new world hidden within mathematics and at least I can now understand how those mathematicians that actually do make new amazing discoveries feel.

You can purchase signed and numbered Limited Edition prints of any image you see on the Scientific Artist web site by e-mailing me at greg@scientificartist.com

You can also purchase signed and numbered Limited Edition prints of any image you see on the New Forest Observatory web site by e-mailing me at the above address.

Print runs are limited to just 250 except for size A4 which is unlimited.  Prices are as follows and includes free U.K. delivery:

I can also produce prints of well-known mathematical constants to 10,000 decimal places (or more if you like, e-mail me for your request) including Pi, e and the Golden Ratio.  If there is a Mathematical object (or constant) that you would like and it does not appear in the Scientific Artist gallery just contact me to see if I can create it for you.

Managed to get a three-dimensional packing of the Sunflower seed-head pattern onto the surface of a sphere (with a lot of false starts) using Mathematica.  Not sure there’s any practical application of this but it was an interesting exercise 🙂